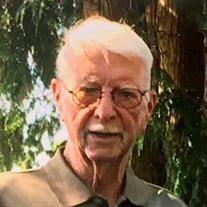 The family of William A. See (Bill) celebrated with him throughout his life, especially over the last seven weeks after he was diagnosed with a life-ending illness. Bill enjoyed laughing, joking, and playing games with his family and was greatly beloved by his five children, their spouses, his grandchildren, and great grandchildren. Instead of the traditional memorial and funeral, his earthly remains will be cremated and the family will choose a later time for celebrating and remembering Bill. Bill’s life began in Decatur, Illinois on January 13, 1933, the fourth child of Regina and Milo See. He departed for his next life on Saturday, April 16, 2022. Bill received his education in the Catholic schools of Decatur, Illinois and after finishing high school, he served in the Navy. Upon completing his service in the Navy, he began a 40 year career with Illinois Power Company. During those years, he attended night classes, earning his Bachelor’s degree from Southern Illinois University in Edwardsville. He was very involved in the Belleville and East St. Louis communities as a member of the Rotary and Chamber of Commerce organizations, receiving the Belleville Jaycees Outstanding Young Citizen of the year award in 1973 for his voluntary work. At Illinois Power Company, he achieved the position of area manager for the LaSalle - Peru, Illinois area. He retired to Lake Martin, Alabama where he enjoyed golfing, fishing and sharing his fishing skills with his family. He was loved and admired by his children, grandchildren, and great grandchildren who shared many special experiences with him. His love, playful spirit, and encouragement will be greatly missed by his bride of 66 years, Loretta Poundstone, his five children, William {Cynthia}, Michael {Yanci}, Angela {Jim Benton}, Daniel {Nina}, Joseph, and his wonderful grandchildren Will, Sophie, Meryl, Madison, Mallory, Erin, Joe, Naomi, Micah, Sky, Peyton, and Lindsay in addition to his great grandchildren Adeline and Charleigh. He will also be missed by his sister Sue Jones, (Bob), his sister-in-law, Sue See, and many nieces and nephews. He received help and support from many good neighbors including Lisa and Ken Sims, who lived next door. Bill’s family wishes to thank those who gave him lifelong medical care, especially the Russell Medical Center and Hospice staff who provided comfort and care at the end of his life.

The family of William A. See (Bill) celebrated with him throughout his life, especially over the last seven weeks after he was diagnosed with a life-ending illness. Bill enjoyed laughing, joking, and playing games with his family and was greatly... View Obituary & Service Information

The family of Mr. William A. See created this Life Tributes page to make it easy to share your memories.

The family of William A. See (Bill) celebrated with him throughout...

Send flowers to the See family.