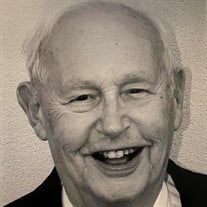 Burial Rite for William Russell King, Jr., 86, of Alexander City, Alabama, was held Friday, July 9, 2021 at 3:00 pm at St. James Episcopal Church (347 South Central Ave. Alexander City, Alabama). Father Rob Iler officiated. Burial followed in the Alexander City Cemetery. The family received friends on Friday, July 9, 2021 from 2:00 pm to 3:00 pm in the Fellowship Hall. Bill, as he was known to his family and friends, or BK, as he was called by his brothers at Pi Kappa Phi, passed away on Tuesday, July 6, 2021 at Russell Medical. He was born on September 11, 1934 in Alexander City, Alabama to William Russell King, Sr. and Virginia Catherine Hagood King. He was a member of St. James Episcopal Church in Alexander City and St. Dunstan’s Episcopal Church in Auburn. His knowledge of Anglican church history was unparalleled. If Bill was anything, he was a lifelong academic. Although Bill attended multiple prestigious universities, including Sewanee: The University of the South and Vanderbilt University, his heart was always at Auburn University and on the Plains. Bill was a master of multiple languages-English, French, and Latin. Bill completed hundreds of hours of coursework at Auburn University, taking graduate level courses into his seventies and acquired a degree in Education. Bill published short stories and at times was called upon to read dissertations at universities around the country. BK pledged the Alpha Iota chapter of Pi Kappa Phi fraternity at Auburn University in fall quarter of 1953 and became the chapter’s 472nd initiate on January 14, 1954. For over 50 years, BK exhorted generations of young men towards higher callings. BK served as Chapter Advisor several times, and he was instrumental in ensuring the viability of the fraternity. On September 12, 2018 BK accepted the title of “Archon Emeritus for Life.” BK will be remembered by his brothers at Pi Kappa Phi as well as all who knew him as a scholar and a gentleman. He is survived by his brother, Walter Leslie "Buddy" King (Jane); brother-in-law, Dr. Lloyd C. Warr; godson, Dr. Robert Gamotis; and clergy friend, Rev. Dr. Wells Warren. He was preceded in death by his parents, William and Virginia; sister, Virginia Blanche Warr; and brother, John Mark King.

The family of Mr. William Russell King, Jr. created this Life Tributes page to make it easy to share your memories.