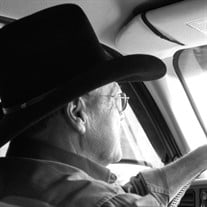 Mr. William Earl Howard, 68, passed away Sunday, August 09, 2020 surrounded by family at his home in Whitney, Texas. A funeral service will be held graveside at 10:00 am on Saturday, August 15, 2020 at Hillview Memorial Park in Alexander City, Alabama with the Reverend Jimmy Allen officiating. Earl was born April 22, 1952 in Pasadena, Texas to the late Woodrow and Mary Allen (Brown) Howard. He grew up in Alabama with occasional moves to the D/FW area of Texas when his father relocated for work. He spent most of his formative years with his grandparents, C.L. and Gladys Howard, because their farm and the outdoors was where he was happiest. He learned honesty and patience from them, and his work ethic from his grandparents John Ernest and Jewel Brown and he never forgot what he learned or where he came from. Earl was blessed with more common sense than most and was always wise beyond his years. Anyone who listened learned something from him. He worked harder than any two men put together, could do anything he put his mind to and did not know the word quit. He was always a valued employee even when he drove his bosses crazy. Earl didn’t make friends easily, but when he did, they were a friend for life. He would help anyone in need and never expected anything in return. As a loving father, Earl did his best to teach his children everything they would need to know to do well in life long after he was gone. Earl was proud of the fact that all six of his children were hard working, productive, and made use of what he’d taught them. He loved his grandchildren enough to be firm with them but still have a little fun. He is survived by his loving wife of 33 years, Lorri (Botz) Howard of Whitney TX; his special ex-wife, Wanda Carter of Fort Worth TX ; daughter Jamie Sconce (Cody) of Callisburg TX; sons Tommy Howard of Euless TX; Earl Howard Jr. (Meredith) of Roanoke TX; Josh Kight (Brandy) of Burleson TX; Chris Kight (Nicole) of Burleson TX; and son Casey Howard of Cleburne TX. He is also survived by the other two children of his heart - honorary daughter Carrie Richmond of Cleburne TX; and nephew Brandon Droddy of Alexander City AL, along with his favorite boss Mike Licata of Suwanee GA. ; Sisters Myra Harry, Amelia Williams and Terry Lynn Claytor. He was blessed with 12 grandchildren who will surely benefit from having known him. He will be greatly missed and totally irreplaceable. Radney Funeral Home is in charge of the arrangements.

Mr. William Earl Howard, 68, passed away Sunday, August 09, 2020 surrounded by family at his home in Whitney, Texas. A funeral service will be held graveside at 10:00 am on Saturday, August 15, 2020 at Hillview Memorial Park in Alexander City,... View Obituary & Service Information

The family of Mr. William Earl Howard created this Life Tributes page to make it easy to share your memories.

Send flowers to the Howard family.