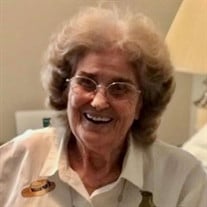 Voncile Ada McGill died peacefully on August 27, 2021 with her family by her side. She was 94 years old and lived a long and eventful life. She was predeceased by her husband of 75 years James McGill of Montgomery, AL, and by her son Allen McGill of Wetumpka, AL. She is survived by her two other sons Scott McGill (and wife Jennifer) of Crane Hill, AL, and Ken McGill (and wife Cathy) of Ocean Isle Beach, NC, her daughter-in-law Paula McGill of Wetumpka, and her four beloved grandchildren (Lori McGill of Birmingham, AL, Sarah McGill of Denver, CO, Adrienne McGill of Girdwood, AK and Chase McGill of Crane Hill, AL). Voncile was born on April 3, 1927 in Fairhope, AL and she lived her early life on the farm there with her 10 brothers and sisters. Shortly after World War II, she met and married returning Air Force airman James McGill. When he reenlisted in the Air Force, she proudly took on the role of service wife. For two decades, she and James, with kids in tow, traveled all over the United States and the world in service to America. After the Air Force, they returned to Alabama, where she spent enormous energy and devotion raising her three sons and tending to the needs of the entire family. She was fiercely protective and proud of her family---always there with a band-aid or a cookie and a hug. She loved the time she spent with her family at the cabin on Lake Martin, was a gardener, a seamstress and an avid reader. Voncile will be missed by her remaining family members, but her wisdom and the memories of our times with her will stay with us forever. She will be laid to rest during a graveside service on September 14, 2021 at 11:00am in the McGill family section of the Hillview Memorial Park of Alexander City, AL. In lieu of flowers, any donations in her memory should be made to any trusted Veterans’ service agency or local literacy project.

Voncile Ada McGill died peacefully on August 27, 2021 with her family by her side. She was 94 years old and lived a long and eventful life. She was predeceased by her husband of 75 years James McGill of Montgomery, AL, and by her son Allen... View Obituary & Service Information

The family of Mrs. Voncile Ada McGill created this Life Tributes page to make it easy to share your memories.