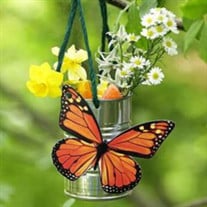 Graveside Service for Mrs. Virginia Gardner Jackson, 103, of Alexander City, will be Thursday, January 28, 2021 at 1:00 pm at the Alexander City Cemetery. Rev. Mike Densmore will officiate. Mrs. Jackson passed away on Sunday, January 24, 2021 at Chapman Healthcare Center. She was born on August 25, 1917 in Helena, Arkansas to Walter A. Gardner and Myra French Gardner. She met her husband, Mack, while living in Memphis, Tennessee. After marrying in 1945, they came to make their home in Alexander City. In her spare time, she loved attending her boys’ sporting events. She was an active member of First United Methodist Church, and she was involved with their Lady’s Circle, Friendship Sunday School Class, and the Circle of Love. She was also involved in Bridge Club, Canasta Club, Sewing Club, and the 20th Century Study Club. She loved her family dearly, and will be greatly missed. She is survived by her sons, Mickey Jackson, Walter Jackson, Ronnie Jackson (Misty), and Robert Jackson; grandchildren, Philip Jackson IV (Amy), Scott Jackson (Jed), Mack Jackson (Sarah), Adam Jackson (Amber), and Rob Jackson; and nine great-grandchildren. She was preceded in death by her husband, Philip "Mack" Jackson, Jr.; parents; and sisters, Doris Bilger, and Anne Clark. The family would like to extend a special “Thank You” to the staff at Chapman’s Healthcare, and her special roommate and friend, Nancy Hand. In lieu of flowers, the family requests that memorial donations be made to the Juvenile Diabetes Research Foundation, at https://www.jdrf.org. All visitations and services will be held in compliance with the mandated rules from Alabama Dept of Public Health.

The family of Mrs. Virginia Gardner Jackson created this Life Tributes page to make it easy to share your memories.

Send flowers to the Jackson family.