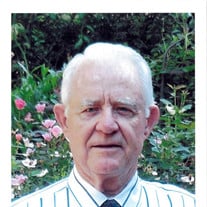 Mr. Moore passed away on Thursday, May 14, 2020 at Bill Nichols State Veterans Home (Alexander City) due to complications of COVID-19. Mr. Moore passed away peacefully in his sleep in the company of nurses at 5:25 am today in his room at Bill Nichols VA Home, here in Alexander City, Alabama. He was born on September 13, 1932, in rural Cleveland County, NC, to Buren Rhea Moore and Dixie Grigg Moore. After growing up on his parent’s farm outside of Blacksburg South Carolina, Mr. Moore entered the Navy where he served on active duty during the Korean Conflict as a gunner’s mate aboard both an LST and a tanker ship. After the war he put himself through college at The University of South Carolina on the GI Bill. He met his wife, Karen, who was a waitress at a restaurant in a suburb of Buffalo, New York while he was working construction during the summer breaks from college. They married in September of 1960, and shortly thereafter he graduated with a degree in civil engineering. He began his career as an engineer working for Daniel Construction Company and then took a job as an engineer with Burlington Industries where he worked his way up to a management position. In 1988 he moved to Alexander City, Alabama where he worked as an engineering manager for both Russell Mills then Robinson Foundry. He was a full time husband, father and grandfather. Mr. Moore was very active in the church as a member of The Church of Jesus Christ of Latter-Day Saints. He joined the church in Greensboro NC where he served as a Sunday School teacher, Sunday School President, Member of the Elders Quorum, and a member of the Bishopric. He became a High Priest and served on the High Council in the Greensboro Stake until he moved to Alabama. Upon arriving in Alexander City, Alabama he joined the local branch of the church where he served as the Branch Clerk, Branch President, played the piano during Sunday services and held a place on the High Council of the Montgomery Stake. Mr. Moore was a devoted family man, earned a private pilot’s license, enjoyed gardening, golf, reading non-fiction, and had begun to teach himself to speak Spanish. His favorite activity was playing with his grandchildren. He is survived by his daughters, Areta Moore Amaker and Jacqueline J. Katich; son Kyle Katich; sisters, Louise Moore White and Susan Moore Jones; grandchildren, Kassie Moore, Tabitha Moore, Kaelin Moore, Tanner Moore, Kayla Katich, Hunter Katich, Mika Katich Butler, Christina Donnelly, Sara Hearon, Michael Hearon and James Hearon. He was preceded in death by his parents; his wife of 58 years, Karen Clever Moore; son Travis Aaron Moore; grandchild, Jennifer Jernigan; siblings, Benjamin Moore, Margaret Moore Waldrop, Charles Moore, Edward Moore, Maynard Moore. A private family gathering and memorial service will be held at the family home in Alexander City, Alabama when circumstances allow. In lieu of flowers, memorial contributions may be made to the Alexander City Branch of the Church of Jesus Christ of Latter-Day Saints, 1515 Worthy Place, Alexander City, AL, 35010. Memorial messages may be sent to the family at www.radneyfuneralhome.com. All visitations and services will be held in compliance with the mandated rules from Alabama Dept of Public Health.

Mr. Moore passed away on Thursday, May 14, 2020 at Bill Nichols State Veterans Home (Alexander City) due to complications of COVID-19. Mr. Moore passed away peacefully in his sleep in the company of nurses at 5:25 am today in his room at Bill... View Obituary & Service Information

The family of Mr. Thomas Aaron Moore created this Life Tributes page to make it easy to share your memories.

Send flowers to the Moore family.