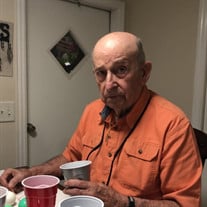 Mr. Thomas Nathaniel "Tommy" Machen 1933 - 2020 Funeral Service for Mr. Thomas Nathaniel "Tommy" Machen, 87, of Sylacauga, Alabama, will be Wednesday, August 19, 2020 at 2:00 pm at the Chapel of Radney-Smith Funeral Home in Sylacauga. Bro. Jeff Adams will officiate. Burial will follow in the Evergreen Cemetery. The family will receive friends on Wednesday, August 19, 2020 from 12:30 pm to 1:30 pm at Radney-Smith Funeral Home. Mr. Machen passed away on Monday, August 17, 2020 at Sylacauga Health and Rehab (Sylacauga). He was born on July 12, 1933 in Sylacauga, Alabama to Thomas Nathaniel Machen and Ruby Lee Mims Machen. He began working at the Shell Plant and later went to work for the City of Sylacuga Gas Department. He worked there for more than 25 years and retired as a Supervisor. He owned and operated Yonders Blossom for several years. Mr. Machen was a big prankster and loved to make people laugh. He enjoyed collecting, antiquing, and flea markets. He could be found every morning with the breakfast crew at Huddle House. Mr. Machen was an excellent repairman and would help anyone. He is survived by his daughters, Pamela Machen of Sylacauga, Diana Boddie (Larry) of Alexander City, and Tommie Lynn Caldwell (Evan) of Sylacauga; grandchildren, Brian Keith Foshee (Tammy) of Helena, Alyson Lynn Foshee of Sylacauga, and Brandon Kyle Foshee of Sylacauga; great-grandchildren, Xoe Foshee, Madelyn Lockwood, and Maci Lockwood; and brother, Sammy Machen (Brenda) of Sylacauga. He was preceded in death by his parents and his wife of 53 years Alice J. Machen. Memorial messages may be sent to the family at www.radneyfuneralhome.com. Radney Funeral Home is in charge of the arrangements. All visitations and services will be held in compliance with the mandated rules from Alabama Dept of Public Health.

The family of Mr. Thomas Nathaniel "Tommy" Machen created this Life Tributes page to make it easy to share your memories.

Send flowers to the Machen family.