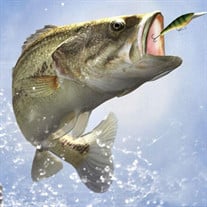 Mr. Stanley Joe Roberts 1947 - 2021 Funeral Service for Mr. Stanley Joe Roberts, 73, of Alexander City, Alabama, will be Tuesday, March 2, 2021 at 2:00 pm at the Chapel of Radney Funeral Home. Burial will follow in the Jackson's Gap Baptist Church Cemetery. The family will receive friends on Tuesday, March 2, 2021 from 12:30 pm to 1:30 pm at Radney Funeral Home. Mr. Roberts passed away on Sunday, February 28, 2021 at his residence. He was born on December 30, 1947 in Dadeville, Alabama to Dale Charmin Roberts and Sara Hayes Roberts. Joe was employed by Avondale Mills for 30 years but is best remembered for the 15 years he spent working at Riverbend Gas and Grocery, where he made many friends with those in the community. His hobbies included fishing, golfing and gambling at the casino. He will be greatly missed by his family and friends. He is survived by his wife of 35 years, Wanda Jo Roberts; daughters, Lisa Knapp (Bill), Angela Roberts (Jamie Commander), Wendy Mitchell; sons, Michael Roberts Janice), Eric Mitchell (Lisa); brothers, Terry Roberts, Chris Roberts (Janie Lee), Ray Roberts (Gloria); ten grandchildren and four great-grandchildren. He was preceded in death by his parents; brothers, Byron Roberts, Marty Roberts and great-grandson, Ashton Gage Gaither. All visitations and services will be held in compliance with the mandated rules from Alabama Dept of Public Health.

The family of Mr. Stanley Joe Roberts created this Life Tributes page to make it easy to share your memories.

Send flowers to the Roberts family.