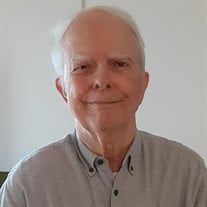 Ronnie Ray Fowler, 83, of Northport, Alabama, passed away peacefully in his home after a long struggle with bvFTD on May 22, 2022, in the presence of his loving wife and daughter. He is survived by his wife of fifty years, Diane Steverson Fowler, daughters Deborah Stevens and Susanna (Darren) Hegyi, sons John (late Elizabeth) and Peter (Emily), fifteen grandchildren, and numerous Texas cousins. Born in Paris, Texas, on February 23, 1939, the only child of Ray and Pauline (Burrow) Fowler, he grew up in Mineola, Texas. He attended Tyler Junior College and received his BS degree from Texas A & M in electrical engineering in 1962. He received his MA degree in rehabilitation technology in 1991 from the University of Alabama. He supported the Aggies and the Crimson Tide and was happy whoever won when they competed against each other. After a stint in the US Naval Reserves, he worked for Texas Power and Light Company as a substation design engineer for several years. He then answered a personal call of God and served in Christian missions in Iguala, Mexico, with Earl Kellum. He then served as business manager of a college student magazine, Campus Fellowship, in Waco, Texas, with Robert Ewing. After marriage in 1972, he and his wife continued working with the magazine, moving to Goshen, Indiana, in 1974. After that, for several years, Ronnie worked at L & J Press Company in Elkhart, Indiana, wiring punch presses. Then he, his wife, and four children, moved to Northport, Alabama, to be near his in-laws to help care for them. He worked various jobs and retired from Flowers Baking Company in Tuscaloosa, Alabama. He worked in the electrical department at the local Lowe's after retirement. Ronnie was a committed follower of Jesus Christ and served in helping ministries-deacon, elder, worship leader, small group leader- in various churches where the family lived. God was faithful to him throughout his life’s journey. Family, friends, homeless and indigent people, international students, and churches have greatly benefited from Ronnie’s spiritual gifting of being a generous, hospitable, hard-working, diligent, supportive “helper.” And, on a lighter note, during his later years he enjoyed playing and helping international students and others learn to play dominoes. His family rejoices that he is free from limitations and now in the eternal presence of his Savior Jesus Christ. Burial was May 23, 2022, in Bice Cemetery, Alexander City, Alabama, Radney Funeral Home officiating. A Celebration of Life service will be Sunday, June 5, 2022, at 2:00 in the afternoon at Hope City Community Church, 3800 University Blvd. E, Tuscaloosa, Alabama. In the place for flowers or memorial, the family requests donations be made to the The Association for Frontotemporal Degeneration. To make a donation please visit either www.theaftd.org or www.facebook.com/TheAFTD.

Ronnie Ray Fowler, 83, of Northport, Alabama, passed away peacefully in his home after a long struggle with bvFTD on May 22, 2022, in the presence of his loving wife and daughter. He is survived by his wife of fifty years, Diane Steverson Fowler,... View Obituary & Service Information

The family of Mr. Ronnie Ray Fowler created this Life Tributes page to make it easy to share your memories.

Send flowers to the Fowler family.