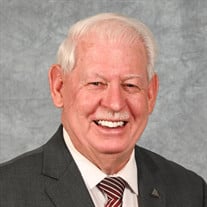 Funeral Service for Mr. Ronnie Jefferson Betts, 74, of Alexander City, Alabama, will be Sunday, September 19, 2021 at 3:00 pm at the Faith Temple. Rev. Chase Clower, Dr. Josh Sammons, and Elder Lynn Royal will officiate. Burial will follow in the Hillview Memorial Park. The family will receive friends on Friday, September 17, 2021 from 4:30 pm to 8:00 pm at Radney Funeral Home. An additional viewing will be held on Saturday, September 18, 2021 from 10 am until 2 pm at Radney Funeral Home. Mr. Betts passed away on Wednesday, September 15, 2021 at East Alabama Medical Center. He was born on October 5, 1946 in Alexander City, Alabama to Nerie Jefferson Betts and Alice Laverne Caldwell Betts. He was an active member of Hillabee Baptist Church where he sang in the choir and served as chairman of the Building and Grounds Committee. He was very active in Alexander City Camp of Gideons International. Chief Betts joined the Alexander City Fire Department in 1974 and retired as Chief in 2008. After retirement he worked as funeral service associate at Radney and Langley Funeral Home. He was a big fan of Southern Gospel Music and hosted the Sunday Morning Gospel Jubilee on Kowaliga Country and Gospel Heritage Video on WAXC- TV. He was a big Alabama fan and enjoyed keeping his lawn immaculate. Of all the jobs he held his favorite was being Paw Paw. He is survived by his wife, Darlene Betts of Alexander City; daughter, Twila Gordon (Scotty) of Alexander City; sons, Jeffrey Todd Betts (Kecia) of Alexander City and Nicholas Betts (Courtney) of Tallassee; grandchildren, Douglas Betts, Braxton Betts, Valerie Baty (Zach), Kelly Bierley, Chelsea Howard (Austin), Hallie Gordon, Emma Betts, and Ellie Betts; great-grandchild, Adelynn Baty; special cousins, Brenda Jordan (Ed) and Patsy Hallman. He was preceded in death by his parents. The family will accept flowers or memorial contributions may be made to The Gideons International PO Box 117 Alexander City, AL 35011.

The family of Mr. Ronnie Jefferson Betts created this Life Tributes page to make it easy to share your memories.

Send flowers to the Betts family.