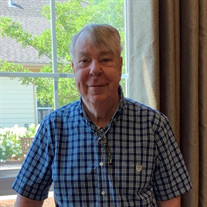 Graveside Service for Mr. Ronald Emmette Russell, 79, of Marietta, Georgia, will be Sunday, June 12, 2022, at 2:00 pm CST at Kellyton Memory Gardens. Rev. Mike Jackson will officiate. There will be a Memorial Service held on Saturday, June 25 at 2:00 EST at the Mayes Ward-Dobbins Funeral Home Chapel in Marietta, Georgia. Mr. Russell passed away on Sunday, June 5, 2022, at Camellia Place in Woodstock, GA. He was born on December 1, 1942, in Marietta, Georgia to John Hadley Russell and Mary Lee Rampley Russell. He was a member of Eastside Baptist Church. He attended Sprayberry High School and Woodrow Wilson College of Law. Ron had an exceptional voice and was often sought out as a young man for solos at church. Ron served as a Bi-vocational Minister of Music for several churches in Cobb County during his life. He had a keen sense of humor and was known to enjoy an innocent prank from time to time. Ron was a Regional Sales Manager for Campbell’s Soup, Tropicana Orange Juice, Tree Sweet, and Canels. He also helped to pioneer Tropicana in the Southeast and was awarded membership in the Million Case Club. He was a Reservist for Naval Air Reserve and served as chaplain of his group. He is survived by his wife, Karen Worthy Russell of Marietta, GA; children, Todd Russell, Julie Boyeskie (Jason), and Kelli Sanders; grandchildren, Ethan Sanders, Sarah Sanders, Connor Boyeskie; sisters, Shirley Dill (Terry), and Mary Russell; sisters-in-law, Dot Russell and Barbara Russell, and numerous nieces and nephews. He was preceded in death by his parents; brothers, James Russell, Joel Russell, Ed Russell, and Herb Russell; and sister-in-law, Betty Russell. In lieu of flowers, donations are appreciated to your charity of choice or to Alzheimer’s Disease research at Emory University- Goizueta Alzheimer’s Disease Research Center. Memorial donations can be made out to: Emory University Emory Office of Gift Accounting 1762 Clifton Road NE, Ste. 1400 Atlanta, GA 30322

Graveside Service for Mr. Ronald Emmette Russell, 79, of Marietta, Georgia, will be Sunday, June 12, 2022, at 2:00 pm CST at Kellyton Memory Gardens. Rev. Mike Jackson will officiate. There will be a Memorial Service held on Saturday, June... View Obituary & Service Information

The family of Mr. Ronald Emmette Russell created this Life Tributes page to make it easy to share your memories.

Send flowers to the Russell family.