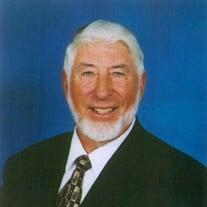 Graveside Service for Mr. Perry Neil Anderson, 84, of Alexander City, will be Saturday, February 20, 2021 at 12:00 pm at the Hillview Memorial Park. Randy Anderson will officiate. The family will receive friends on Saturday, February 20, 2021 from 10:00 am to 11:30 am at Radney Funeral Home. Mr. Anderson passed away on Tuesday, February 16, 2021 at his home surrounded by loved ones. He was born on November 4, 1936 in Gorman, Texas to Perry Hobson Anderson and Lena Ruth Mefford Anderson. He was very active in the community most of his life. He served as Scoutmaster of Boy Scout Troop 63 and was named Man of the Year in 1982. Mr. Anderson worked for Russell Corp and retired after 33 years as Manager of Grounds Beautification. He started the 100% recycling program and cooked for all company functions, including the awards banquets. Neil played basketball for the Russell Southern team and had a basketball scholarship to Southern Union Junior College. He was a member of the Elks Lodge, the Masonic Lodge, past president of the Owls Club, and member of the Board of Directors for Boys and Girls Club. He volunteered in the Red Cross Soup Kitchen, the Alabama Special Olympics. He and Bette owned and operated Bette’s Garden Center for 18 years and he especially enjoyed the Christmas tree season. Neil enjoyed doing standup comedy, magic shows, and fishing with his friends at Grand Isle, LA. He is survived by his wife of 21 years, Bette Thomas Anderson of Alexander City; son, Edward Neil Anderson of Sylacauga; daughters, Valerie Anderson Burnett (Davis) of Atlanta, GA and Allison Whitehead of Auburn; grandchildren, Scotlyn Whitehead and Emily Windham; brother, Elvin Anderson of Prescott, AR; numerous nieces and nephews; and special friends, Sharon Spears and Charles and Monica Hearn. He was preceded in death by his parents, daughter-in-law, Benita Judah Anderson, five sisters, and one brother. Memorial messages may be sent to the family at www.radneyfuneralhome.com The family extends their heartfelt thanks to Dr. Benjamin Hinkle and Encompass Home Health and Hospice.

The family of Mr. Perry Neil Anderson created this Life Tributes page to make it easy to share your memories.

Send flowers to the Anderson family.