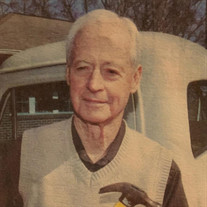 Graveside Service for Mr. Miles Harrison Ward, 85, of Alexander City, will be Thursday, August 20, 2020 at 2:00 pm at the Hillview Memorial Park. Pastor Brett Self and Dr. Matt Haines will officiate. Mr. Ward passed away on Sunday, August 16, 2020 at his residence. He was born on October 13, 1934 in Richville, Alabama to William Edward Ward and Sarah Francis Lee Ward. He was an active member and deacon of Stone Ridge Baptist Church. He loved the Lord, his family, and his fellow man. Mr. Ward was a servant who wanted no recognition for what he did. He and Mrs. Ward participated in many mission trips across the United States. He worked for the Alabama Highway Department as a licensed civil engineer and licensed land surveyor for 44 years. Mr. Ward worked with Habitat for Humanity and served on its Board of Directors for the Alexander City Chapter. He is survived by his children, Janet Landefeld (Boyd Lowman) of Meridianville, AL, Miles Harry Ward (Nita), Jr. of Alexander City, Lisa Burns (Tim) of Alexander City, and Raymond K. Ward (Connie) of Alexander City; grandchildren, Jeremy Humphries (Michelle), Brett Burns (Claire), Megan Ward, Callie Sprayberry (Patrick), Harrison Ward, and Stewart Ward; great-grandchildren, Lexi Humphries, Lance Humphries, Georgia Burns, and Adalyn Burns; and brother, Tommy Ward (Kay). He was preceded in death by his wife of 65 years, Willie Ray Ward; his parents; grandchildren, Margaret Ray Ward, Austin Miles Ward; and sister, Sarah Janell Searcy. The family will accept flowers or memorial contributions may be made to the Building Fund of Stone Ridge Baptist Church 2324 6th Street Extension Alexander City, AL 35010 or perform a good deed for someone in need.

The family of Mr. Miles Harrison Ward Sr. created this Life Tributes page to make it easy to share your memories.

Send flowers to the Ward family.