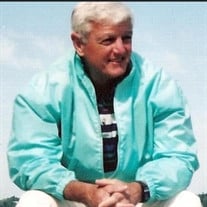 Graveside Service for Dr. Michael Larry Tuggle, 85, of Alexander City, will be Thursday, March 4, 2021 at 10:00 am at the Alexander City Cemetery. Dr. T. Michael Morgan will officiate. The family will receive friends on Wednesday, March 3, 2021 from 4:30 pm to 6:30 pm at Radney Funeral Home. Dr. Tuggle passed away on Friday, February 26, 2021 at Brown Nursing Home. He was born on December 24, 1935 in Birmingham, Alabama to Venson Stony Tuggle and Geraldine Richards Tuggle. He was an active member of First United Methodist Church of Alexander City where he sang in the choir and held many offices in the Church. He received his undergraduate degree in Civil Engineering and lettered in Track at Auburn University. He received his Masters and PhD in Environmental Engineering from the University of Florida. Dr. Tuggle served in the United States Marine Corps as a Naval Aviator and was discharged as a Captain. He worked for International Paper then with Boeing on the Saturn V Rocket Program. He founded Thompson and Tuggle in Montgomery which eventually became CH2M Hill. Dr. Tuggle fell in love with Lake Martin, moved here and went to work for Russell Corp, serving as the Vice-President of Environmental and Engineering Services. He was a constant volunteer for Main Street, LMRA, Habitat for Humanity, the Chamber of Commerce, was highly active in the community and served on the Engineering Council at Auburn University. He was Chamber of Commerce Man of the Year in 1987 before he renovated and owned the Shoppes of the Queen’s Attic. He was heavily involved in the Windemere Community where he was a founding member of the volunteer fire department and served as a volunteer fireman. He is survived by his wife of 62 years, Julia DeForest Tuggle of Alexander City; sons, Michael Tuggle, Jr. (Vicki) of Birmingham, Mark Tuggle (Michelle) and Jeffrey Tuggle (Deanne) both of Alexander City, and David Tuggle of Pelham; grandchildren, DeForest Tuggle, William Tuggle, Ben Tuggle, Sydney Tuggle, Ashley Tuggle, and Julia Tuggle; and brothers, Gale Tuggle (Sandy) and Rodney Tuggle (Jody). He was preceded in death by his parents and brother, Gary Tuggle. In lieu of flowers the family requests memorial contributions may be made to Habitat for Humanity PO Box 1973 Alexander City, AL 35011 or to Children's Harbor One Our Children's Highway, Alexander City, AL 35010. All visitations and services will be held in compliance with the mandated rules from Alabama Dept of Public Health.

Graveside Service for Dr. Michael Larry Tuggle, 85, of Alexander City, will be Thursday, March 4, 2021 at 10:00 am at the Alexander City Cemetery. Dr. T. Michael Morgan will officiate. The family will receive friends on Wednesday, March 3,... View Obituary & Service Information

The family of Dr. Michael Larry Tuggle created this Life Tributes page to make it easy to share your memories.

Send flowers to the Tuggle family.