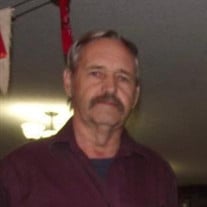 Mr. Michael Vance Hunter 1953 - 2021 Mr. Michael Vance Hunter, age 67 of Alexander City, passed away on Friday, February 5, 2021 at Russell Medical. He was born on November 20, 1953 in Alexander City to Elzie Lamar Hunter and Helen Mask Hunter. He was a member of First United Methodist Church - Trinity Campus and attended Rocky Creek Baptist Church. Michael was a transportation driver for 34 years. He was a jack of all trades and could fix anything. He enjoyed golfing, gardening, watching the Game Show Network, Cartoon Network and Wheel of Fortune. He was an avid Alabama fan and NASCAR fan with Davey Allison being his favorite driver. He loved his family very much and his greatest joy was being called “Pops”. Michael is survived by his wife of 38 years, Diane Hunter of Alexander City; daughters, Shanna Gielski (Justin) of Maple Valley, WA and Jeanna Bradberry (William) of Alexander City; grandchildren, Riley Thomas, Sophie Gielski, Axel Gielski, Cely Bradberry and Bryant Thomas; sister, Phyllis Petty of Alexander City; brothers, Ronald L. Hunter (Shirley) and Ricky L. Hunter (Debora), both of Alexander City; nephews, Scott Hunter (Sheena) and their children, Harrison, Harper and Hayes; and Craig Hunter (Stormy) and their children, Austin, Hallie and Hudson; and niece, Kayla Jackson. He was preceded in death by his parents. A memorial service will be held at a later date. In lieu of flowers, memorial contributions may be given to First United Methodist Church - Trinity Campus, 3266 US Hwy 280, Alexander City, AL 35010 or Rocky Creek Baptist Church, 7779 Sanford Road, Alexander City, AL 35010. The family would like to give a special “Thank You” to the staff at Russell Medical for their compassion and professionalism during our time of need. We would also like to thank Kayla Woodruff Jackson and Southern Care Hospice for their love and support. Also, thanks to Jim Bob’s for their generous blessing to the family.

The family of Mr. Michael Vance Hunter created this Life Tributes page to make it easy to share your memories.

Send flowers to the Hunter family.