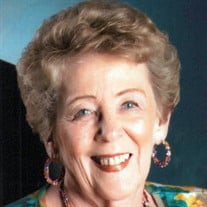 Funeral Service for Mrs. Maxine Parks Gill, 78, of Alexander City, Alabama, will be Saturday, June 18, 2022, at 4:00 pm at the Chapel of Radney Funeral Home. Rev. John Hill will officiate. Burial will follow in the Dadeville City Cemetery. The family will receive friends on Saturday, June 18, 2022, from 2:30 pm to 3:30 pm at Radney Funeral Home. Maxine Parks Gill passed away on Thursday, June 16, 2022, at Chapman Healthcare Center. She was born to Jonnie Mae (Pruet) Parks and Lee Sumlin Parks on June 30th, 1943, in Winter Haven, Florida. Maxine was the youngest of three children, coming after her brothers, Bennie Lee Parks and William Chester Parks, II. The young Parks family packed up and moved to Eclectic when Maxine was 3. There her father ran the Kowaliga store while she and her brothers ran amok, having the time of their lives. She learned to swim not long after their move when Bennie and Chester threw her off the Kowaliga bridge. They thought it was a great idea. Their father did not. Not many years later, their friend, Hank Williams, sat on their back steps to write Kowaliga. Maxine, always the precocious one, asked if they would receive royalties. He told her no, but that every time she heard the song played, she’d know he was singing about her home. Even then, she thought royalties would be better. Fast forward a few more years and her family moved to Alexander City where she spent a very happy childhood roaming Russell Village, playing with friends who remained close to her heart her entire life. You may know them as the Golden Girls, Glenda (Clark) Jones, Betty Ann (Smith) Speakes, and Clardine (Jones) Sumners. They were like family. In high school, Maxine was a swimmer and diver, earning many ribbons. She was also a member of the high school choir and several other clubs. After graduation, Mr. Russell sent her to computer school. She began in Russell’s computer department working keypunch and worked her way up in the Information Services Department to become the first female supervisor for Russell Corporation. What an honor. She was told by Mr. Pete Brooks that she would serve as a test subject for women in management, and that the whole company would have its eye on her. Maxine worked in ISD for 50 years. She loved every minute of it as well as all the people who came through the doors of her department. Greater than her love for her work, was her love for her family. Nothing made her happier than having them all around her cooking catfish or eating Christmas dinner. Maxine is preceded in death by her parents, and her brother, Bennie. She is survived by her beloved husband, Sam Gill, her children, Christie M. Poole (David), Jeffrey H. Mattox (Jerrie), Debbie G. Gilliland (Danny), Steve Gill, Amy G. Hill (Brock), her grandchildren, Aubrey Whitt (Brandon), Alden Poole, A.J. Poole, Kiersten Mattox, Kyle Mattox, Bryan Riddle (Amanda), Bradley Riddle (Lindsey), Brittany McCants (Micheal), Kaleigh Bailey (Blake), Marlee Hill, 11 great-grandchildren, her brother, Chester Parks (Tillie), a host of nieces and nephews, and her dear friend, Sue Gulledge, who has been right by her side through it all. She will be missed by all of us. Family will accept flowers or memorials may be made to, Flint Hill United Methodist Church, 2858 Flint Hill Road, Alexander City, Alabama 35010.

The family of Mrs. Maxine Parks Gill created this Life Tributes page to make it easy to share your memories.

Send flowers to the Gill family.