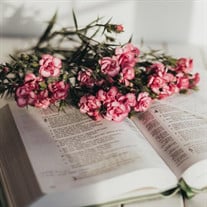 Graveside Funeral Service for Mrs. Mary Daphene Whatley, 91, of Alexander City, Alabama, will be held Saturday, January 8, 2022, at 2:00 pm at Hillview Memorial Park, 1926 Hillabee Street in Alexander City. Bro. Perry Phillips will officiate. Family and friends are invited to this graveside service. Mrs. Whatley passed away on Saturday, January 1, 2022, at UAB Hospital in Birmingham, Alabama after a short convalescence there. She was born on May 12, 1930, in Goldville, Alabama, to Owen Allen Burnette and Willa Ruth Moody Burnette. She was a woman of great faith and devotion both to the Lord and to her family and was a member of the Alexander City Church of Christ. She was as faithful as could be in attending services and more recently in daily reading the Scripture in her room at Chapman Assisted Living in Alexander City. She and Wayne B Whatley were married on August 20, 1951. They celebrated their 50th Anniversary in 2001. She is survived by her sons, Roger Alan Whatley, of San Saba, Texas, and Michael Whatley, of Eufaula, Alabama, and by her daughter, Mary Alisa Lanier, of Birmingham, Alabama; grandchildren , Jennifer Chambers (Jeff), of Dripping Springs, Texas, Sarah Westerfield, of Georgetown, Texas, and Alana Lockhart (James), of Thorndale, Texas, Anne Marie Morton (Timothy), of El Paso, Texas, Peter Lanier (Amanda), of Spokane, Washington State, and Alison Rogers (David), of Birmingham, Alabama; great grandchildren; Elise Chambers, Kinley Chambers, Westin Chambers, Hannah Chambers, Gavin Westerfield, Harper Westerfield, Hudson Lockhart, Hayden Lockhart, Madeline Morton, Charlotte Morton, William Morton, Sloane Rogers, Margot Rogers, and Ashdon Lanier. She was preceded in death by her husband of 56 years, Ltc. Wayne B Whatley, United States Army and by her parents, of Goldville, and her sister Annie Sibyl Hanson, of New Site.

The family of Mrs. Mary Daphene Whatley created this Life Tributes page to make it easy to share your memories.

Send flowers to the Whatley family.