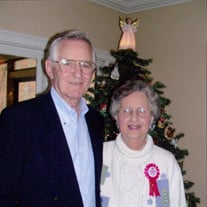 Graveside Service for Mrs. Margaret Alice Taylor Bradford, 89, of Alexander City, will be Sunday, May 2, 2021 at 3:30 pm at the Hillview Memorial Park. Minister Chris Tidwell will officiate. The family will receive friends on Sunday, May 2, 2021 from 1:00 pm to 3:00 pm at Radney Funeral Home. Mrs. Bradford passed away on Sunday, April 25, 2021 at her residence. She was born on November 30, 1931 in Birmingham, Alabama to Francis Marion Taylor and Freda Crum Taylor. She graduated from West End High school and later attended Auburn University. She was a member of Southview Church of Christ. Even when she was home bound, she continued to host a Ladies Bible Study in her home. Alice was a faithful Christian woman whose greatest joy was found in her faith in God and the love of her family. She was a stay-at-home mom to her four children, and later enjoyed working at Hillabee Towers for 20 years. She is survived by her four children, Diane Bradford Snow (Mark) of Pelham, Taylor Bradford (Glenda) of Sylacauga, Robert Bradford of Alexander City, Jennifer Bradford Brady (David) of Birmingham and Janie Holden (Aaron), whom she claimed as her fifth child; her grandchildren, Emily Wilkins (Chris), Amanda Snow Lawson (Chris), John Bradford (Courtney), Kate Snow, Logan Brady (Fiancée Aspen), Maggie Brady, Emma Brady; great-grandchild Baby Snow-Lawson on the way; sister-in-law, Susan Farley Taylor and numerous nieces and nephews. She was preceded in death by her husband of 60 years, Bernard Pierson Bradford; parents; grandson, Matt Snow; sister, Frances Taylor Eitson and brother, Irvin Lee Taylor. The family would like to extend a special “Thank You” to the staff of Southern Care Hospice and Hometown Pharmacy, as well as her sitters, Serena King and Mary Strickland, who loved her like family. The family will accept flowers or memorial contributions may be made to the Southview Church of Christ, 2325 Dadeville Road, Alexander City, AL, 35010 or to Mamie's Place Children's Library, 318 Church Street, Alexander City, AL, 35010. All visitations and services will be held in compliance with the mandated rules from Alabama Dept of Public Health.

Graveside Service for Mrs. Margaret Alice Taylor Bradford, 89, of Alexander City, will be Sunday, May 2, 2021 at 3:30 pm at the Hillview Memorial Park. Minister Chris Tidwell will officiate. The family will receive friends on Sunday, May 2,... View Obituary & Service Information

The family of Mrs. Margaret Alice Taylor Bradford created this Life Tributes page to make it easy to share your memories.

Send flowers to the Bradford family.