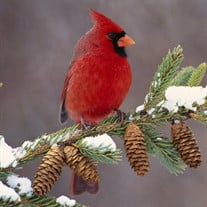 Mrs. Magdalene “Madeline” Vardaman, 90, of Alexander City, Alabama, spread her wings to fly away home on Friday, July 2, 2021, at Russell Medical. She was born on February 4, 1931 in Alexander City, Alabama to Robert Harvey Moody and Martha Birtie Foshee Moody. After graduating from Benjamin Russell High School, she was the first in her family to attend college and earned a degree from Birmingham Business College. Mrs. Vardaman met the love of her life, Hunter, in Birmingham. They would spend much of their early married years traveling the world and living in Europe as a military family right after WWII. In 1956, Madeline even braved a transatlantic flight alone with a new infant and a toddler. The family would be drawn back to Alabama in the early 1960s by the burgeoning aerospace industry. Mrs. Vardaman served 20 years as an Executive Secretary for the first five Deans of the School of Primary Medical Care at the University of Alabama in Huntsville. Her dedication to her position helped to build the program that is now part of the world class UAB Medical School campuses. Mrs. Vardaman constantly sought continuing education, including computer skills classes at the dawn of the digital age. She actively encouraged other professional women to gain skills and advance their own careers. Prior to UAH, she served in various offices including Auburn University Dean of Women, Russell Manufacturing Personnel Office, and General Dynamics of Huntsville as one of the first women of the aerospace industry. She left a professional legacy of organizational efficiency and competence. Her personal legacy of quiet grace and self-sacrificing kindness was even stronger. After retiring to Alexander City, Mrs. Vardaman was an active member of First United Methodist Church-Green Street Campus-Alexander City and the Tohpeka Chapter of the Daughters of the American Revolution. She was an avid fisherwoman who could catch anything off the docks at Manoy Creek. She was “Nana” to many grandchildren, great-grandchildren, and her beloved rescue chihuahua Ricky. Her avid love of reading, coffee, and desserts lives on in all her descendants. Her famous chocolate sheet cake and sweet potato casserole recipes have been taught to granddaughters and will continue to appear at holidays. She was caretaker for family members later in life, earning her own angel wings well before she left this earth. Funeral Service for Mrs. Magdalene Vardaman will be Tuesday, July 6, 2021 at 11:00 am at the Chapel of Radney Funeral Home. Rev. Blue Vardaman and Rev. Mike Densmore will officiate. Burial will follow in the Hillview Memorial Park. The family will receive friends on Tuesday, July 6, 2021 from 9:30 am to 10:30 am at Radney Funeral Home. She is survived by her daughter, Pam Vardaman Young (Tom); son, Rev. Blue Vardaman (Betty); grandchildren, Trisha Vardaman, Mary Ann Vardaman, Kristen Osborne (Joshua), Hunter Vardaman, Alex Vardaman (Mary Elizabeth), Robby Vardaman, Michael Sornsin, Sydney Vardaman, Krislyn Vardaman, Bentley Vardaman, and Nathan Vardaman (Tara); great-grandchildren, Tristen Vardaman, Faith Cofer, Brooks Vardaman, Gunnar Vardaman, Chance Vardaman, Avalyn Vardaman, Isaac Vardaman, James Wesley Vardaman, and Thomas Osborne. She was preceded in death by her husband, Hunter W. Vardaman, II; son, James Vardaman; parents; sister, Maebelle Moody Still; and brothers, General Lee Moody and Alton Moody. Flowers will be accepted, or memorials made to First United Methodist Church Circle of Love, 310 Green Street, Alexander City, AL, 35010.

The family of Mrs. Magdalene Vardaman created this Life Tributes page to make it easy to share your memories.

Send flowers to the Vardaman family.