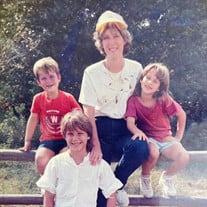 A private memorial service for Ms. Linda Eubanks Lockwood Reynolds, 68, of Alexander City, will be held in New Braunfels, Texas at a later date. Linda passed away on Thursday, May 5, 2022 at Chapman Healthcare. She was born on September 3, 1953, in Big Spring, Texas to Maurice Franklin Eubanks and LaJoy Burks Eubanks. She graduated from Southwood High School in Shreveport, LA. She was on the drill team, dance team, and enjoyed her high school years. She earned a Bachelor of Arts degree and swam competitively and excelled in water skiing in college. Linda worked as a journalist for the Shreveport Times for several years. She later earned a master’s degree in Education and taught Special Education in Shreveport, LA and Conroe, Texas. Linda was diagnosed with a brain tumor at 32 years old as the mother of three young children. While medical professionals gave her little chance of survival, God gave her many more years to live and enjoy watching her children grow and experience her twelve grandchildren. Despite the seemingly impossible obstacles life has thrown at her, she has risen and overcome through God’s Grace. If you know Linda, she was stubbornly positive and had an unbreakable faith in her Creator, come what may. She is survived by her daughters, Jill Dark (Will) of Alexander City, AL and Nikki Nixon (Brandon) of Conroe, TX; son, Luke Lockwood (Camilla) of Austin, TX; grandchildren, Zane Nixon, Reese Nixon, Eden Nixon, Hope Nixon, Noah Nixon, Haven Nixon, Miles Nixon, Theo Nixon, Aubrie Dark, Brooklyn Dark, Christian Dark, and Evelyn Branham; Mother, LaJoy Eubanks of Burnet, TX; and sister, Sandra LeBaron (Richard) of San Antonio, TX. She was preceded in death by her father, Maurice Franklin Eubanks and twin brother, Alan Eubanks.

A private memorial service for Ms. Linda Eubanks Lockwood Reynolds, 68, of Alexander City, will be held in New Braunfels, Texas at a later date. Linda passed away on Thursday, May 5, 2022 at Chapman Healthcare. She was born on September 3,... View Obituary & Service Information

The family of Ms. Linda Eubanks Lockwood Reynolds created this Life Tributes page to make it easy to share your memories.

Send flowers to the Reynolds family.