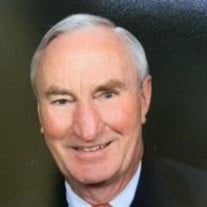 Funeral Service for Mr. L. Neil Smith, 90 of Alexander City, Alabama will be held on Friday, January 7, 2022, at Radney Funeral Home. Dr. Skip Lowery will officiate. The family will have visitation on Friday, January 7th from 9:45 am to 10:30 am with the funeral services following at 11:00 am. Immediately following the funeral there will be a graveside service at Hillview Memorial Park. Mr. Smith passed away peacefully with family by his side on Tuesday, January 4, 2022, in Spartanburg, South Carolina. He was born on April 9, 1931, in Alicia, Arkansas to Thomas Arthur Smith and Sarah Abigail (Watts) Smith. He graduated from Clover Bend High School in 1948 as valedictorian and went on to graduate from Arkansas State University in 1953. Neil served in the United States Army for five years as an Army aviator reaching the rank of 1st Lt. while stationed in Germany. When he returned to the States, Mr. Smith began his career in data processing in Pensacola, Florida and then in Greenville and Rock Hill, South Carolina before moving his family to Alexander City, Alabama. He worked for Russell Corporation for over 25 years and was telecommunications manager for many of those years. Neil was also involved in the Southeastern Telecommunication Association (SETA) for years and served as President and CEO. Mr. Smith was a longtime member of the First Baptist Church of Alexander City and served as Deacon for many years. He also enjoyed singing in the choir and teaching Sunday School. He was a devoted and loving son, brother, husband, father, uncle, and grandfather. He loved Auburn football, golfing, and spending time outdoors but mostly enjoyed time with his family and all of his grandchildren who affectionately called him "Geedo." He is survived by his wife of 66 years, Jewel Cauley Smith of Alexander City, Alabama; son, Randy Smith (Jacqui) of Charleston, South Carolina; daughter, Angie Webster (Jimmy) of Birmingham, Alabama; and son, David Smith (Tonja) of Spartanburg, South Carolina; grandchildren, Brittany Smith of Woodstock, Georgia; Sarah Abigail Smith of Atlanta, Georgia; Zack Smith (Jessica) of Phoenix, Arizona; Drew Webster of Atlanta, Georgia; Cole and Laurel Smith of Spartanburg, South Carolina; Mayfield Reynolds (Holli) of Raleigh, North Carolina; Forest Reynolds (Kacey) of Spartanburg, South Carolina; great granddaughter, Everett Reese Reynolds of Raleigh, North Carolina; and many nieces and nephews. The family requests memorial contributions be made to the American Heart Association.

Funeral Service for Mr. L. Neil Smith, 90 of Alexander City, Alabama will be held on Friday, January 7, 2022, at Radney Funeral Home. Dr. Skip Lowery will officiate. The family will have visitation on Friday, January 7th from 9:45 am to 10:30... View Obituary & Service Information

The family of Mr. L. Neil Smith created this Life Tributes page to make it easy to share your memories.

Send flowers to the Smith family.