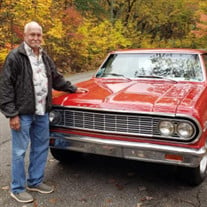 Funeral Service for Mr. Kenneth Neal Shaw, Sr., 75, of Rockford, Alabama, will be Saturday, March 27, 2021 at 11:00 am at the Chapel of Radney Funeral Home. Rev. James Gallops will officiate. Burial will follow in the Union Church Cemetery. The family will receive friends on Saturday, March 27, 2021 from 9:30 am to 10:30 am at Radney Funeral Home. Mr. Shaw passed away on Wednesday, March 24, 2021 at Brookwood Medical Center. He was born on May 7, 1945 in Rockford, Alabama to Joseph Aubrey Shaw and Frances Thornell Shaw. Mr. Shaw loved his family dearly. He was a people person and loved visiting and fellowshipping with others. Mr. Shaw was a member of Union Church and the caretaker of Union Church Cemetery for many years and faithfully attended Concord Baptist Church. He was retired from Sylacauga Utilities and served as Constable for Coosa County for many years. Mr. Shaw was the owner and operator of Ken’s Package Store in Rockford; where Fred the Town Dog would hang out with him and they formed a special bond over the years. He loved to sell vegetables and fruits just to be able to socialize with his family, friends, and strangers that he would make friends with and was told by his cousin that he could sell ice to an Eskimo. Mr. Shaw loved to express his civic duty by working the voting polls in Rockford for many years. He was president of the Union Square Neighborhood Watch and served on the board of Alfa Insurance. Mr. Shaw had a passion for car shows and took first place with his 1964 Chevelle Malibu at The World of Wheels in Birmingham; also traveling to Gulf Shores to The Wharf for the Bama Coast Cruise show. He also enjoyed traveling to the Great Smokey Mountains and going to flea markets. He is survived by his wife of 47 years, Sherry Stroud Shaw; daughter, Robin S. Schmidt (Johnnie); son, Kenneth Neal Shaw, Jr. (Alicia); grandchildren, Dustin Shaw (Katie), Cody Schmidt-Rawlinson (Chase), Travis Shaw (Christian), Jonah Schmidt, Libby Blair (Derrick), and Shanda Culver; nine great grandchildren; brothers, Charles Shaw (Lavern) and Bill Shaw (Angie); several beloved nieces and nephews; and a host of cousins. He was preceded in death by his parents; brother, Joseph Ronald Shaw; mother-in-law, Doris P. Stroud; and father-in-law, Winston Stroud. The family will accept flowers or memorials may be made to, Union Church and Cemetery, 6745 Coosa Co. Rd. 18, Rockford, Alabama 35136.

Funeral Service for Mr. Kenneth Neal Shaw, Sr., 75, of Rockford, Alabama, will be Saturday, March 27, 2021 at 11:00 am at the Chapel of Radney Funeral Home. Rev. James Gallops will officiate. Burial will follow in the Union Church Cemetery.... View Obituary & Service Information

The family of Mr. Kenneth Neal Shaw Sr. created this Life Tributes page to make it easy to share your memories.

Send flowers to the Shaw family.