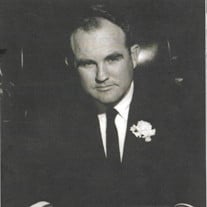 After a lifetime of service to the great State of Alabama, on Friday, June 4, 2021, John Malcolm Patterson passed away at the age of 99, surrounded by family, at the place of his birth, Timbergut Farms, in Goldville, Alabama. He was born on September 27, 1921, in Goldville, Alabama, and graduated from Central High School in Phenix City, after which he joined the U.S. Army at only 17 years old, needing his father's permission to do so. Serving honorably in World War II, he quickly rose through the ranks to Major, earning a Bronze Star for his meritorious service on General Eisenhauer’s command staff and with an artillery battalion in military campaigns across North Africa, Sicily, Italy, Southern France, and Germany. In 1947, after the war, he married the late Mary Jo McGowin, with whom he had two children, Albert Love Patterson III and Barbara Louise Patterson Scholl. He attended The University of Alabama, majoring in political science, received his law degree in 1949, and was recalled by the Army for service in the Korean War, where he was transferred to the Judge Advocate General section. In 1953, after completing his military service, Mr. Patterson returned to Phenix City and practiced law with his father until his father was assassinated as he left his law office. John assumed the law-and-order mantle of his fallen father and was elected the thirty-sixth Attorney General of Alabama on a campaign platform to end the illegal gambling operations and corruption that had been pervasive throughout Phenix City and elsewhere in the state. In 1958, he defeated George Wallace in the race for Governor and became the second youngest person to ever serve as Governor of Alabama. As Governor, he devised a rescue plan for the state's schools, which were in disrepair and underfunded; he called a special legislative session on education to raise teachers' salaries and pass a $100 million bond issue for schools; he worked fiercely to pass a $60 million bond issue for highway construction and maintenance; he obtained desperately needed additional revenue for education, state pensions, and mental health by increasing the state sales tax on liquor and cigarettes and closing several sales tax loopholes; and he marshalled support for the passage of a much needed small-loan law that effectively curtailed the activities of loan sharks. After serving with distinction and dedication in Montgomery for eight years, Mr. Patterson returned home to practice law and teach American government at Troy State University. In 1975, he married the former Florentina Brachert Sawyer. Unable to refrain from serving his state, in 1984, the distinguished gentleman accepted an appointment to the Alabama Court of Criminal Appeals, where he served for many years, and, in 2004, as his last act of public service, he was sworn in as the Special Chief Justice of the Alabama Supreme Court to preside over an appeal. Governor Patterson has long been known for his impeccable dress, courtly manner, genteel speech, and gracious and generous demeanor. While he served the state admirably as Attorney General and Governor, many believe his true calling was in a judicial robe; unquestionably an extraordinary legal scholar, Judge Patterson lent wisdom, fairness, common sense, and refined judicial temperament to the courts of Alabama. After retirement from public service, he spent his waning years as a full-time gentleman farmer. He is remembered as having been a joy to share a beverage with, for he was full of wisdom, wit, and waggish yarns. His stories, which completely captured the attention of his audiences, always demonstrated that he was a treasure trove of Alabama and American history; few Alabamians have prominently participated in government from such varied and influential vantage points, and his contributions to our state and country remain meaningful, continuing, and significant. After a lifetime spent in the service of our great state and country, he now enters into eternal rest. He is preceded in death by his parents, Albert Love Patterson and Agnes Louise Benson Patterson; sister, Sybil Maxine Patterson; brothers, Albert Love Patterson, Jr. and Maurice Woodrow Patterson; and grandson Lamar Mixson. He is survived by his wife, Tina Brachert Patterson; two children, Albert Love Patterson III (Sharon), Barbara Louise “Babel” Scholl (Rudolf); stepdaughters, Maria Florentina Mixson (Mickey) and Christa Ann “Lamby” Hayes (Royce); brothers, Samuel Brewer Patterson and Jack Benson Patterson (Kay); sister-in-law, Christa Passat (Donald); grandchildren, David Patterson (Cayce); John Scholl, Benjamin Patterson (Wendy), Dr. Elizabeth Hindman (Caleb), Timothy Patterson, Ian Jones, Zoey Jones, Florentina Adams, and Elizabeth Mixson; nine great-grandchildren; and lifelong caregivers and friends, Mary Katherine Lyons, James Louis Lyons, and Darlene Lyons. A visitation service will be held Wednesday, June 9, from 4:00 – 8:00 p.m. CST, at Radney Funeral Home, 1326 Dadeville Rd., Alexander City, AL 35010. A private memorial service for family will be held at a later date.

After a lifetime of service to the great State of Alabama, on Friday, June 4, 2021, John Malcolm Patterson passed away at the age of 99, surrounded by family, at the place of his birth, Timbergut Farms, in Goldville, Alabama. He was born on... View Obituary & Service Information

The family of Gov. John Malcolm Patterson created this Life Tributes page to make it easy to share your memories.

After a lifetime of service to the great State of Alabama, on...

Send flowers to the Patterson family.