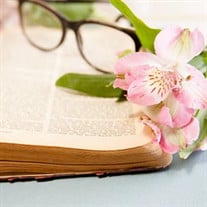 Joan Odom Broom Smith, 75, of Alexander City, went home to be with the Lord on October 25, 2020 at 12:43pm. She passed peacefully with her family by her side. Joan was born on December 26, 1944 to Viola and Tennis Odom and raised in her beloved hometown of Decatur, Alabama. Joan is survived by her loving husband, Coleman Smith, Jr.; her children Alan Broom (Christie), Amanda Broom Miles (Stephen); stepchildren Coley Jay Smith and Stephanie Sue Smith; grandchildren Addison Broom, Allison Broom, Rachel Miles, and Carrie Miles; step-grandchildren Baylen Smith, Lexi Garrett, and Lily McDonald. Also surviving are her two precious cousins, Jan Akin and Lynn Land; nieces Andrea Guthrie and Jana Baudendistel (Ted); and sister-in-laws, Rebecca and Robbie Broom. She is preceded in death by her first husband of 37 years, Joe Broom, her mother and father, her brother, Dr. Pat Odom, and sister-in-law Marjorie Odom. Joan was a long-time resident of Alexander City who served the community and the Lord. As a member of First Baptist Church, she served as Children’s Choir Director and was involved in the Adult Choir and membership for many years. Joan was a past President of the Preceptor Epsilon Chapter of Beta Sigma Phi, the B.R.H.S. High School Band Boosters, and on the Board of Directors of the Alabama Sheriff’s Girls Ranch. In her later years she was a member of Alexander City Methodist Church. Joan worked for Russell Corporation for many years as Executive Assistant in the Credit and Athletic Departments. As a loving mother Joan was happiest when surrounded by her family. She enjoyed being with her friends, music, decorating, photography, and reading house magazines and recipes. Funeral Service for Joan Odom Broom Smith will be Wednesday, October 28, 2020 at 1:00 pm at the Chapel of Radney Funeral Home. Burial will follow in the Flint Hill United Methodist Church Cemetery. The family will receive friends on Wednesday, October 28, 2020 from 11:00 am to 12:30 pm at Radney Funeral Home.

Joan Odom Broom Smith, 75, of Alexander City, went home to be with the Lord on October 25, 2020 at 12:43pm. She passed peacefully with her family by her side. Joan was born on December 26, 1944 to Viola and Tennis Odom and raised in her beloved... View Obituary & Service Information

The family of Mrs. Joan Odom Broom Smith created this Life Tributes page to make it easy to share your memories.

Send flowers to the Smith family.