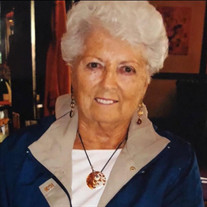 May 22, 1937 - October 16, 2020 Joan Marilyn Kreisel Allen of Dadeville, AL passed away peacefully at her daughter’s, Cathy Worthy, house in Madras, OR, on Friday, October 16, 2020 at the age of 83 after a long battle with Parkinson’s. She was born on May 22, 1937 in Amsterdam, New York to the late Erhardt Valentine Kreisel and Ann Kreisel. She was also preceded in death by her husband, Steve Allen. Joan loved to travel and lived in many places. From Amsterdam, NY to Richmond, Oakland, and Santa Rosa in CA, to Bolivar, MO, to Ft. Lauderdale, FL, to Dadeville, AL to Madras, OR. On one of her travels, she passed through Alexander City and fell in love with Lake Martin. She moved there in 1989 and spent a good part of her life living in Dadeville, AL and relaxing at her place at Bama Park on Lake Martin. She attended St. John Apostle Catholic Church in Alexander City, AL. She was an avid sports fan and loved swimming and playing cards, especially Rook. She loved, sold, and and collected Avon for many years. She had many jobs throughout her life, secretary, waitress, classified ad taker, philatelic clerk at the post office, and receptionist for Dr. Hakim. Joan is survived by her sister, Joyce Burns, of Alexander City, AL; sister, Gloria Walker, of Madras, OR; son, Jim Allen (Janette) of St. Cloud, FL; daughter, Cathy Worthy of Madras, OR; daughter, Terri DeVries of Jackson’s Gap, AL; grandson, Derek DeVries of Augusta, GA; granddaughter, Rachel DeVries Markham of Wetumpka, AL; grandson, Jason Genove of AK, grandson, Chris Hopkins of Portland, OR; grandson, Daniel Hopkins of Portland, OR; grandson, Justin Allen of St. Cloud, FL; granddaughter, Katie Allen of Orlando, FL; great-grandsons, Corbin and Tyler DeVries of Augusta, GA; great-grandson, Caleb Markham of Wetumpka, AL; and great-granddaughter Allison Markham of Wetumpka, AL; four nephews and one niece. Joan loved all kinds of water, pools, lakes or oceans. She was cremated and her and her husbands ashes will be scattered at sea. The Family will be handling services at a later date. Any donations in her memory should be made to the American Parkinson Disease Association or to the charity of your choosing.

The family of Mrs. Joan Allen created this Life Tributes page to make it easy to share your memories.

Send flowers to the Allen family.