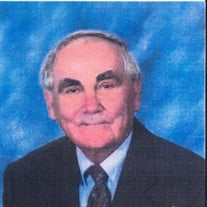 Jimmy Ralph Pemberton, 85, went to be with the Lord on Wednesday, May 25, 2022. He was born June 14, 1936 in Tallapoosa County, AL. Jimmy was the son of William Lawton and Helen McKelvey Pemberton. He grew up in Dadeville and Alexander City, AL and had one older sister, Syble. His favorite thing to do was fish and he was in the Whopper Catch Club at a young age. He loved his many Aunts, Uncles, and cousins growing up. In his senior year at Benjamin Russell High School, he was on the 1953 undefeated Wildcat Football team. He remained close friends with these men his entire life. He aspired to be an Air Force Fighter pilot and enrolled in Aerospace Engineering at Alabama Polytechnical Institute (Auburn University). He never became a pilot but went on to make a significant impact in Space exploration and Department of Defense Missile defense systems. Upon graduating API, he began his career in Fort Worth, TX working on the B-58 then moved to Orlando, FL and worked for Martin Marietta on the US Army Pershing I surface to air missile in the Weights and Balance Group. Wanting a more challenging role, he moved to Huntsville, AL in 1961 and first worked for Chrysler and Teledyne Brown Engineering as a Structural Analysis Engineer supporting the Marshall Space Flight Center design of the Saturn 1 First Stage Thrust Structure. His team designed the “web structure” for the eight engines that thrust the rocket into space. He performed his work on the slide rule he had in college. About this time, he and his wife, Carolyn began their family, purchased a home, and had two children, Kim and Jim. Jimmy also obtained his Master’s Degree in Engineering Mechanics at UAH. Jimmy was promoted to section chief working on advanced payloads/concepts for the Saturn 1 and Saturn V rockets. These engineers were creating science as this was uncharted territory. He remained friends with several of these men the rest of his life. After a brief stint with Boeing, still working on Saturn V, Jimmy and Carolyn, refused an offer to relocate out of AL so Jimmy had a brief 2-year stint working for Pascoe Steele in Columbus, GA, only an hour from their hometown. When the opportunity arose, Jimmy moved his family back to Huntsville in 1972 and began his career as a Civil Servant for the U.S. Army Safeguard Command working on short range and long range Anti-Ballistic Missiles. From this point Jimmy worked on the Spartan Missile and SPRINT Missile before transitioning to the U.S. Army Missile Command working on the nuclear warhead integration effort on the Pershing II, and eventually became a Branch Chief for a Missile which helped defend against Russia in the Cold War. He then worked to demilitarize the missiles when President Reagan signed the INF Treaty. The remaining career years were spent as Acting Chief on the Stinger Missile, and then Chief Engineer on the Army TACMS Missile including meetings with the French and British Army and a presentation to NATO in Belgium. Jimmy professed his faith in Jesus in 1964 and remained a member of University Baptist Church for 58 years. He was a loyal friend, historian, and genealogist. He loved his companion of 25 years, Lou Ashworth, with all his heart. He was proud of his contributions to space and defense, and he was very proud of his children and grandchildren. He was preceded in death by his son, Jim Pemberton, parents, William Lawton and Helen McKelvey Pemberton, and sister, Syble Johnston. Jimmy is survived by his daughter, Kim Brooks (Tom) of Atlanta, three grandsons; Trey Brooks, Lawton Pemberton, and James Pemberton, his beloved companion Lou Ashworth, and several nieces, nephews, and cousins. A special thanks goes to Dr. Elbahesh, Tammy, and Sarah Wilson at Clearview Cancer Center for their excellent care over the past four years. Family visitation and a Memorial Service will be on Tuesday, May 31st at 10:00 am at Berryhill Funeral Home, Huntsville, AL followed by a second service on Saturday, June 4th, at 10:00 am at Flint Hill United Methodist Church in Alexander City, AL. Burial and then a Pemberton reunion style potluck lunch will follow.

Jimmy Ralph Pemberton, 85, went to be with the Lord on Wednesday, May 25, 2022. He was born June 14, 1936 in Tallapoosa County, AL. Jimmy was the son of William Lawton and Helen McKelvey Pemberton. He grew up in Dadeville and Alexander City,... View Obituary & Service Information

The family of Mr. Jimmy Ralph Pemberton created this Life Tributes page to make it easy to share your memories.

Jimmy Ralph Pemberton, 85, went to be with the Lord on Wednesday,...

Send flowers to the Pemberton family.