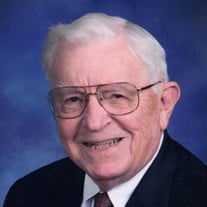 James W. (Bill) Brown Jr. died on April 8, 2022 at the age of 97. He was preceded in death by his wife of 65 years, Georgia Margaret Thompson Brown. He is survived by their three children, Margaret (Peggy) Brown Crowder, David Stephen Brown (Katherine), Martha Dee Brown Eadie (Joe), by three grandchildren, Elizabeth Eadie (Wit Snodgrass), Jonathan Eadie (Ashley), Stephen Brown (Caroline) and by four great grandchildren, James Rowland Snodgrass, Sadie Virginia Brown, John Wylie Snodgrass and Grant William Brown. He was born in Phenix City, AL and grew up in Atlanta, GA where he attended Boys High. During World War II, he served 21 months in The European Theater of Operations with the 50th Armored Infantry Battalion. He was awarded the Silver Star, Bronze Star, Combat Infantry Badge and the Purple Heart. After returning home from the war, he completed his college education at Emory University and graduated with a degree in Business Administration. He married his high school sweetheart and went to work at Grady Memorial Hospital in Atlanta, GA as an Administrative Assistant. He was later recruited to Alexander City, AL to become the first Hospital Administrator of Russell Hospital and was later named as President and CEO of Russell Hospital (now Russell Medical). He served in this position until his retirement at age 70. During his time at Russell Hospital, he was active in state, regional and national hospital organizations. He served as President of the Alabama Hospital Association, President, Southeastern Hospital Conference, member, Board of Directors of the Southeastern Hospital Conference and a Fellow of the American College of Hospital Administrators. In 1977 he was awarded the Gold Medal of Excellence by the Alabama Hospital Association. On the local level, he served as President, Alexander City Kiwanis Club and in 1962 was honored as Man of the Year by the Alexander City Chamber of Commerce. He taught Senior High Sunday School at the First United Methodist Church in Alexander City where he also sang in the choir for many years. In later years, he and his wife joined St. James Episcopal Church in Alexander City where he served as Senior Warden as well as a member of the choir. He enjoyed world history, maps, geography and math. He kept up with family and current events through all the latest technology. He adapted easily to the many platforms/social media used by his children and grandchildren. Staying in touch with his family was a priority. He was very grateful for the good health that enabled him to live independently for so long. He continued to be involved with Russell Medical, serving on the Hospital Board after his retirement. A graveside Memorial Service is planned. Contact St. James Episcopal Church in Alexander City for details. Memorials may be made to Russell Medical Foundation, PO Box 939, Alexander City, AL 35011 or to Meals on Wheels of Alexander City, 3316 Hwy 280, Alexander City, AL 35010.

James W. (Bill) Brown Jr. died on April 8, 2022 at the age of 97. He was preceded in death by his wife of 65 years, Georgia Margaret Thompson Brown. He is survived by their three children, Margaret (Peggy) Brown Crowder, David Stephen Brown... View Obituary & Service Information

The family of Mr. James "Bill" Brown Jr. created this Life Tributes page to make it easy to share your memories.

Send flowers to the Brown family.