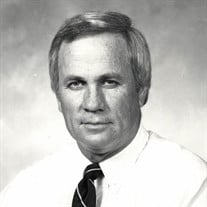 Graveside Service for Mr. Gerald Denny McGill, 84, of Alexander City, Alabama, will be Sunday, May 8, 2022, at 3:00 pm at the Alexander City Cemetery. The family will receive friends on Sunday, May 8, 2022, from 1:00 pm to 2:30 pm at Radney Funeral Home. Mr. McGill passed away on Monday, May 2, 2022, at his residence. He was born on August 8, 1937, in Alexander City, Alabama to Louis Jennings McGill and Callie Mae Talley McGill. He was a member of the Avondale Scout Troop 167 and obtained the rank of Eagle Scout. He graduated from Benjamin Russell High School in 1955. He attended Auburn University on a full Avondale scholarship and was a member of the Phi Kappa Alpha fraternity. He was awarded a bachelor’s degree in Textile Engineering in 1959. After graduation, he worked for Russell Corporation from 1959 to 1994 and retired at the age of 55 as Executive Vice President of Manufacturing. He joined the Elks at age 21 and served 2 terms as Treasurer and 3 terms as Trustee and earned a lifetime membership. He also served his community as County Commissioner for 4 consecutive terms, served on the Board of Directors of Aliant Bank, and was a founding member of the Five Star Plantation Hunting Preserve. He was serving as CEO of McGill Timberlands at the time of his passing. His passion was his farm, where he spent countless hours with his family and friends. He is survived by his wife of 48 years, Martha McGill of Alexander City; son, Chris McGill of Buttston, daughter, Julie McGill (Cindi) of Pensacola, FL, son, Pat McGill (Brooke) of Atlanta, GA, son, Barry McCollough (Rachel) of Equality, daughter, Danie Halcomb (Bobby) of Auburn, special son, James Young of Jacksons Gap; 13 grandchildren; 2 great grandchildren; brother, Harold McGill of Perryville. He was preceded in death by his parents, sister, Merlene Jones, and brother, Douglas McGill. In lieu of flowers, donations may be made to the Alabama Wildlife Federation 3050 Lanark Rd, Millbrook, AL 36054.

The family of Mr. Gerald Denny McGill created this Life Tributes page to make it easy to share your memories.