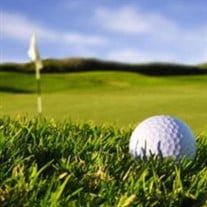 Memorial Service for Mr. Frank Cole McInnis, 62, of Alexander City, will be Wednesday, October 7, 2020 at 1:00 pm at the Chapel of Radney Funeral Home. Bro. Mike Wells will officiate. The family will receive friends on Wednesday, October 7, 2020 from 11:00 am to 12:45 pm at Radney Funeral Home. Mr. McInnis passed away on Friday, October 2, 2020 at East Alabama Medical Center. He was born on September 20, 1958 in Greenville, Mississippi to Frank McInnis and Wilma Dean McSwain McInnis. He was an active member of LifeSpring Church in Dadeville. He recently celebrated 35 years at Willow Point Golf and Country Club, where he has served as superintendent. He loved his family fiercely, and will be greatly missed. Cole grew up in Hattiesburg, Mississippi where he hunted, fished and played ball until he was about thirteen. Cole then started playing golf and began on the path to becoming a golf course superintendent. “Things were different when I was growing up than they are today. Everyone in Hattiesburg left their doors unlocked. We lived on the edge of town, across the road from the countryside. I would come in from school and take my bird dogs across the road and go hunting in the woods.” Cole started out in school in architecture and transferred to Auburn University to study in the architecture program there. “After three and a half years of sitting behind a drawing board I decided I wanted to spend more of my working life outdoors and because of my love of golf transferred to Agronomy and Turfgrass Maintenance and got a degree from Auburn in 1981.” Immediately after graduation Cole came to Willow Point where he worked under superintendent, Tony Dickenson. He stayed there for a brief 18 months. Due to his father’s health, Cole accepted a job at Northwood Country Club in Meridian, Mississippi as superintendent. During his first year there Gene Davenport, who was President of Russell Lands at that time, asked Cole to come back to Willow Point. The rest is history as they say. While maintaining the course at Willow Point, Cole had the opportunity to participate in many golf tournaments locally and on the State level. Though Cole would deny this statement, he was one of the best amateur golfers in the Southeast. He won thirteen Club Championships, won the Willow Point Invitational in 1997, and was the runner up in the 1999 Alabama State Amateur at Turtle Point in Florence. Cole mentored students on Central Alabama Community College golf team. Cole could always be seen riding on the golf course with a dog by his side. Cole met the love of his life, Karen, at work; whom he lovingly called “Beautiful”, they were best friends and inseparable the twenty-seven years they spent together, married for 22 years of that time. They have a son, Forrest, and a daughter, Mally. Cole spent lots of time with Forrest at ball practice and karate class. He was very active in his daughter’s life as well by supporting her in her dance classes and competitions, and he was thrilled when she joined the Benjamin Russell Golf team in high school. Karen and Cole had two grandchildren, who Cole doted on. They called him “Boss”. Cole was very involved in the Emmaus community and a member of LifeSprings Church. He had a servant’s heart and was active in the church community by serving on the leadership team at LifeSprings Church and volunteering frequently at Emmaus. Cole loved his family, his work, and most importantly he loved and sought after God. He is survived by his wife of 22 years, Karen McInnis of Auburn, AL; son, Forrest McInnis (Magan) of Auburn, AL; daughter, Mally McInnis of Auburn, AL; grandchildren, Emma McInnis, and Railey McInnis; and sister, Hollye McInnis of Gulfport, MS. He was preceded in death by his parents.

Memorial Service for Mr. Frank Cole McInnis, 62, of Alexander City, will be Wednesday, October 7, 2020 at 1:00 pm at the Chapel of Radney Funeral Home. Bro. Mike Wells will officiate. The family will receive friends on Wednesday, October 7,... View Obituary & Service Information

The family of Mr. Frank Cole McInnis created this Life Tributes page to make it easy to share your memories.

Send flowers to the McInnis family.