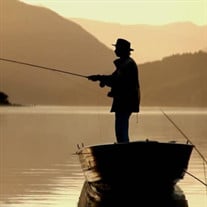 Graveside Memorial Service for Mr. Douglas Ray Coker, 74, of Alexander City, will be Sunday, January 10, 2021 at 2:00 pm at the Hillview Mausoleum. Mr. Coker passed away on Saturday, January 2, 2021 at Russell Medical. He was born on January... View Obituary & Service Information

The family of Mr. Douglas Ray Coker created this Life Tributes page to make it easy to share your memories.

Send flowers to the Coker family.