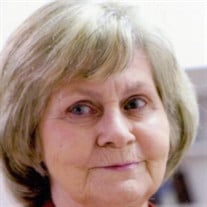 The Graveside Service for Mrs. Dorothy “Dot” Roberts Montgomery, 81, of Vestavia Hills, AL, and formerly of Alexander City, AL, was performed on Friday, March 19, 2021, at 3pm at the Hillview Memorial Park. Reverend Brian Erickson of Trinity United Methodist Church in Homewood, AL, officiated. Dot Montgomery passed away on Wednesday, March 17, 2021, at University Hospital in Birmingham, AL, with her daughter and granddaughter by her side. She was born on July 24, 1939, near Oxford, Alabama, to Wilks Edward Roberts and Mildred Couch Edwards. She moved to Alexander City, AL, with her mother and three of her siblings shortly after her father paid the ultimate sacrifice in World War II. She attended business school and was married to Mr. Bobby Joe Montgomery of Alexander City. She was a diligent and hardworking employee of Liberty National in Alexander City for many years prior to retiring in 1991. She and Bobby had one daughter, Ditra Montgomery Campbell. They were married for 59 years before he passed away in 2015. For the last few years of her life, Mrs. Montgomery enjoyed living with her family in Vestavia Hills, AL, and she supported several Christian ministries in her spare time. She is survived by her daughter, Ditra Montgomery Campbell (Bob) of Fort Walton Beach, FL; granddaughter, Dr. Sarah Campbell Novara (Trey) of Vestavia Hills, AL; great-grandson, Thompson Allen Novara of Vestavia Hills, AL; sisters, Bettie Griffin, Anne Smith, and Jeni Voss (Michael); and brother, Bill Edwards (Cathy). She is also survived by her sister-in-law Patricia McCain (Burren) and by nieces and nephews who she loved dearly. Mrs. Montgomery was preceded in death by her husband, Bobby Joe Montgomery, son, Bobby Wilkes Montgomery, her grandson, John Paul Campbell, her brother, Jerry Roberts, and her parents. The family requests that memorial contributions in lieu of flowers may be made to one of Mrs. Montgomery’s favorite organizations, Children's Harbor at One Our Children's Highway, Alexander City, AL 35010. Memorial messages may be sent to the family at www.radneyfuneralhome.com. Radney Funeral Home served in making arrangements.

The family of Mrs. Dorothy Roberts Montgomery created this Life Tributes page to make it easy to share your memories.

Send flowers to the Montgomery family.