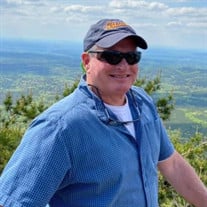 Funeral services for David Ernest McGhee, 56, of Alexander City, Alabama, will be Wednesday, August 18, 2021, at 2:00 p.m. at the Church in the Pines. Rev. Rick Levell will officiate. Burial will follow in the Alexander City Cemetery. A public viewing will be held at Radney Funeral Home on Tuesday, August 17, 2021, from 5:00 p.m. until 8:00 p.m. For all events, guests are asked to wear masks and practice social distancing. Mr. McGhee passed away on Friday, August 13, 2021, at Russell Medical. He was born on October 24, 1964, in Alexander City, Alabama, to John William "Billy" McGhee and Virginia "Ginny" Yevich McGhee. He was an active member of the Alexander City community as a business owner, joke teller, and event host. He viewed every stranger as a future friend and every friend as a treasure. Mr. McGhee was a graduate of Jacksonville State University, where he was a member of the Kappa Sigma fraternity. He was a committed blood donor, and he had a loving, giving heart that led him to regularly help others in many ways. He is survived by his wife, Cindy McCormack McGhee of Alexander City, Ala.; daughter, Boston Elizabeth Kanani McGhee of Fort Walton Beach, Fla.; stepdaughters, Jordyn (Chase) Edmondson of Jacksons Gap, Ala., and Emerald Muniz of Oakridge, Ore.; stepsons, Zayne Amason of Los Angeles, Ca., and Forest Halualani of Dallas, Texas; mother, Virginia Y. McGhee of Jacksons Gap, Ala.; sisters, Barbara Anne (Ty) Spears of Prattville, Ala., and Dell (Darien) St. John of Foley, Ala.; brother, William Douglas (Leslie) McGhee of Birmingham, Ala.; and many nieces, nephews, and other extended family. He was preceded in death by his father, John William "Billy" McGhee. The family requests any memorial contributions be made to the Lions Club of Port St. Joe, Box 1024, Port St. Joe, FL 32457. The family also encourages the Alexander City community to give to local charities and perform acts of kindness in the community that he loved so much.

Funeral services for David Ernest McGhee, 56, of Alexander City, Alabama, will be Wednesday, August 18, 2021, at 2:00 p.m. at the Church in the Pines. Rev. Rick Levell will officiate. Burial will follow in the Alexander City Cemetery. A public... View Obituary & Service Information

The family of Mr. David Ernest McGhee created this Life Tributes page to make it easy to share your memories.

Send flowers to the McGhee family.