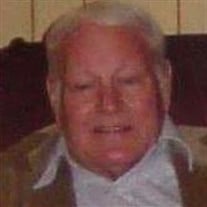 Mr. Clarence Edward Richardson 1944 - 2021 Graveside Service for Mr. Clarence Edward Richardson, 77, of Goodwater, will be Thursday, January 28, 2021 at 3:00 pm at the Bradford United Methodist Church Cemetery. Rev. Scott Jordan will officiate. The family will receive friends on Thursday, January 28, 2021 from 1:30 pm to 2:30 pm at Radney Funeral Home. Mr. Richardson passed away on Monday, January 25, 2021 at Ascension Sacred Heart Hospital in Pensacola FL. He was born on January 4, 1944 in Ashland, Alabama to Aubrey Richardson and Ailene Hindmon Richardson. He attended Kellyton Revival Center. Clarence was well known for his love of fishing but was better known for his love for the Lord. He spread Gods love with everyone he came in contact with, whether it was on the phone, in the grocery store or to someone he ran into on the street. Many people were led to Christ through his testimony. He loved his family, friends and church family deeply. He is survived by his wife of 14 years, Levis Askew Richardson of Goodwater; son, DeWayne Richardson; daughter, Sandy Charboneau, both of Tahlequah, OK; stepsons, Bobby Meadows and Benny Meadows, both of Goodwater; grandchildren, Taylor Richardson and Kassandra Charboneau, both of Tahlequah, OK; brother, Carlton Richardson (Betty); sister, Carolyn Campbell (Henry) host of nieces, nephews and friends He was preceded in death by his parents; sister, Mary Ruth Lane; brothers, Lee, Clyde, James, Jimmy and Billy Wayne Richardson. All visitations and services will be held in compliance with the mandated rules from Alabama Dept of Public Health.

The family of Mr. Clarence Edward Richardson created this Life Tributes page to make it easy to share your memories.

Send flowers to the Richardson family.