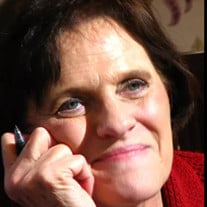 Catherine Greene Browne passed peacefully on Thursday morning, September 9th 2021 after bravely battling pulmonary fibrosis for several years. She was surrounded by her family and caring support team as well as her priest, Father Rob Iler. Catherine was born to Catherine Donnelly Greene and Lovick Edward Greene on September 20th, 1939. She is preceded in death by her parents, siblings Bunny Jane Shipley, James Thomas Greene II, infant daughter Mary Frances Browne and her beloved grandchild Hailey Browne. She is survived by her spouse of 61 years, Charles Anthony Browne, her siblings Elisabeth Anne Greene Meyer (Tom), Lovick Edward Greene II. Children: Chuck Browne (Cathy), Lisa Richard (Bob), Peter Browne (Christie), Jennifer Nabors (Steve) and Jamey Browne. Grandchildren: Trevor Browne (Martina), Vincent Browne, Charles Browne, Christopher Richard (Katie), Sarah Richard, Ethan Browne, Phoebe Browne, Jake Browne, Anna Fasanello (Nick), Ellen Nabors, Laura Nabors, Sam Browne, Marie Browne and Riise Browne. Great-Grandchildren: Hayden, Riley, Eloise, Luetta, Corbin and Sylvie. Catherine spent the majority of her life in Forest Park, Birmingham, Alabama. She was a member of the Episcopal Cathedral of the Advent in Birmingham and also a member of St. James Episcopal Church in Alexander City, Al. She attended Huntington College in Montgomery and UAB in Birmingham, Alabama. She recently moved to their lake home in Jackson’s Gap, Alabama. She and Charlie worked with various youth groups and stay in touch with many of the people they worked with. Catherine was a gardener, member of the Forest Park Garden Club and Cliffside Garden Club. She loved her beautiful flowers in her homes in Forest Park and Lake Martin. She was a noted author, publishing two historical books and numerous historical articles. Catherine was the driving force in having Forest Park added to the National Historical Register. She led historical tours in Forest Park and other areas of Birmingham. She was an officer - President of both garden clubs and historian of many clubs. She served for over eleven years as President of the Friends of Avondale Park, was a major influence in the restoration of the Avondale Villa and Park. She was a member of the Birmingham Music Club and the Music Guild. Member of the Jefferson County Historical Commission and received the award for Outstanding Achievement for Historical preservations. Charter Member of the Birmingham Historical Commission. She loved her family, her neighborhood, friends and will be greatly missed. We will always remember her for her guidance. “Remember who you are and what you represent” Catherine Browne A memorial service will be scheduled at St. James Episcopal Church in Alexander City, Alabama. In lieu of flowers, memorials may be given to St. James Episcopal Church, 347 South Central Ave. Alexander City, Alabama 35010. The service will be livestreamed on the St. James Episcopal Church Facebook page located at https://www.facebook.com/stjalexcity . It will also be available to view on the St. James Episcopal Church website at a later date. The church website address is https://www.stjamesalexcity.com .

The family of Mrs. Catherine Greene Browne created this Life Tributes page to make it easy to share your memories.

Send flowers to the Browne family.