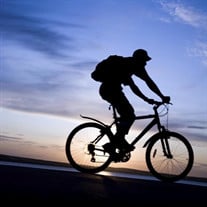 Mr. Burren Simpson Grant McCain 1937 - 2022 Graveside Service for Mr. Burren Simpson Grant McCain, 84, of Alexander City, will be Monday, May 9, 2022, at 11:00 am at the Hillview Memorial Park. Rev. Wayne Cowhick will officiate. The family will receive friends on Sunday, May 8, 2022, from 5:00 pm to 7:00 pm at Radney Funeral Home. Mr. McCain passed away on Friday, May 6, 2022, at Encompass Health and Rehabilitation Hospital. He was born on November 11, 1937, in Alexander City, Alabama to William Burren McCain and Gladys Odell Spears McCain. He graduated from Benjamin Russell High School before attending Auburn University, where he received a bachelor's degree in Textile Management. He worked at Russell Corp. for over 40 years, retiring as Manager of Quality Assurance. He enjoyed cycling and painting. He is survived by his wife, Patricia Montgomery McCain of Alexander City; daughter, Melissa McCain Ficquette of Pelham; son, Grant McCain (Stephanie) of Alexander City; grandchildren, Nicholas Ficquette (Kathrine) and Trevor Ficquette, both of Pelham. He was preceded in death by his parents; sisters, Mona McCain Denney and Charlotte Ann McCain; and brother, Timothy McCain. Radney Funeral Home is in charge of the arrangements.

The family of Mr. Burren McCain created this Life Tributes page to make it easy to share your memories.

Send flowers to the McCain family.