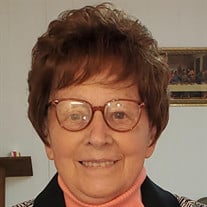 Graveside Service for Mrs. Betty Jean Wilson, 81, of Kellyton, Alabama will be Sunday, November 7, 2021 at 11:00 am at the Kellyton Memory Garden. Bro. Jerry Cox and Bro. Sam Kaufman will officiate. Mrs. Wilson passed away on Friday, November 5, 2021 at her residence. She was born on May 13, 1940 in Cullman, Alabama to T.W. “Bill” Hanners and Lucille Richardson Hanners. Mrs. Wilson was an active member of The Church of God. She worked for Russell Corp. for 25 years and retired from the Coosa Spinning plant in 1991 at the age of 51. For the next 5 years she ran the family farm. In 1996 she went to work for Goody’s family clothing store where she worked as a manager at large for the next 12 years. She retired a second time in 2008 where she continued to work on the farm and preserved vegetables and jellies for her large family. They were her greatest love, and she was very proud of them. Mrs. Wilson was also known for her fried pies. She is survived by her husband of 62 years, Phillip Larry Wilson, Sr.; daughters, Lorie Anderson (Mike) of Millerville, Alabama and Debbie Oliver (Myron) of Titus, Alabama; sons, Phillip Wilson, Jr. (Andi) of Kellyton, Alabama and Tucker Wilson (Julie) of Dadeville, Alabama; eight grandchildren; seven great-grandchildren; sisters, Edna Hardman and Frances Nelson; and brother, Thomas Hanners. She was preceded in death by her parents; sister, Evelyn Moncrief; and brother, Talmadge Hanners. The family would like to extend a heartfelt thanks to the ICU staff of Russell Medical, Encompass Health, and Mable Smith.

The family of Mrs. Betty Jean Wilson created this Life Tributes page to make it easy to share your memories.

Send flowers to the Wilson family.