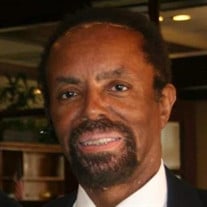 A Memorial Funeral Mass for Arturo Avila Le Grand, 74, of Alexander City, Alabama will be Monday, June 28, 2021 at 11:00 am at the Chapel of Radney Funeral Home. Father Thomas Reddy Gopu will officiate. The family will receive friends on Monday, June 28, 2021 from 9:30 am to 10:30 am at Radney Funeral Home. Mr. Le Grand peacefully passed away on Tuesday, June 22, 2021. He was born on July 11, 1946 in San Nicolas, Aruba to Arthur Le Grand and Orfelina Le Grand Bryson. Arturo loved his family and friends dearly. Arturo attended St. Augustinus College and MTS JFK School in Aruba and Brooklyn Polytechnic University where he excelled in mathematics. Arturo was very proficient in Spanish, English, Dutch, Papiamento, German, and French. These skills allowed him to attain employment at Brooklyn Union Gas Company and Time Warner Cable Company in the customer service field. He was a United States Army Veteran. He was a member and at one time the President of NY Antillean Association, where through his efforts many scholarships were afforded Antillean students across continents. He loved humor and at times used it to tease, confuse, and generate heated conversation. At times he was highly opinionated specific to Science and Politics. He considered himself the greatest Latin dancer. He was devoted to his family and friends; their pain became his. He traveled far distances to console them and spent fortunes to cross the oceans to be at their funerals. He thought his presence was a great consolation because he would guarantee the family and attendees a good laugh. Arturo also loved Latin music; for it brought him closer to home and remembrance of childhood celebrations. He was a great collector of watches and even started giving them out as gifts. In recent years he renewed his love for The Lord and would share Biblical verses with everyone to assure them that his love was true and sincere. He is survived by his wife of 40 years, Miranda Le Grand; he parented with Octavia Brooks Le Grand a daughter, Adelee Le Grand Smith and a son, Jaisen Le Grand; also left to mourn his passing are his maternal aunt, Lorenza Darley, his siblings, Sydney, Norma, and Andre Le Grand, his grandchildren, Sara Smith, Doris Smith, Logan Smith, Willis Smith, Justin “Panama” Le Grand, Alyssa Le Grand, and Jordan Le Grand; son in law, Stanley Smith; and sisters-in-law, and brothers-in-law, countless nieces, nephews, cousins, and his friends across two continents. He was preceded in death by his parents and sister, Myrna Le Grand. See You Later Tomorrow. I Love You Brandy.

A Memorial Funeral Mass for Arturo Avila Le Grand, 74, of Alexander City, Alabama will be Monday, June 28, 2021 at 11:00 am at the Chapel of Radney Funeral Home. Father Thomas Reddy Gopu will officiate. The family will receive friends on Monday,... View Obituary & Service Information

The family of Mr. Arturo Avila Le Grand created this Life Tributes page to make it easy to share your memories.