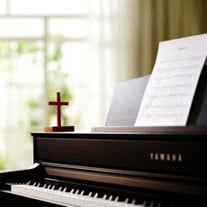 Anita Fay Ginn of Gulf Shores Alabama passed away at her home on January 02, 2022. Funeral services will be held on Sunday, January 09, 2022 at 12:00 PM at Radney's Funeral Home in Alexander City, Alabama, preceded by visitation at 11:00 AM. Burial will follow at Hillview Memorial Park. Anita was born December 09, 1930 and was a native of Enterprise, Alabama. She was a graduate of Massey Business College in Birmingham Alabama. There she met her future husband, David Ginn and were later married on January 6, 1951. Ann and her husband David, raised two children while living in Anniston and then Alexander City, Alabama, where they were members of the United Methodist Church. She was a cheerleader in high school, played piano for the Glee Club and the church congregation. She was also a business woman who along with her husband, owned and operated David’s Jewelers Inc. in Alexander City, Alabama for over 30 years. She became the Treasurer of Alabama Retail Jewelers Assn. while enjoying bridge, golf, square dancing, and entertaining friends. Ann was a beloved wife, mother, grandmother and great grandmother. She has been described by others as “nurturing, intelligent with a quick wit, compassionate, and devoted.” She was very kind with a gentle strength and love for her family even in her last days. Ann was preceded in death by her husband, Zion David Ginn Jr.; her mother, Ruby Bowden Forehand; her father, Sylvester Forehand; and her brothers, Raymond and Durwood Forehand. Her survivors include her daughter and son in law, Glenda and Billy Cofer of Brunswick Georgia, her son and daughter in law, Steve and Paula Ginn of Madison, Mississippi, and six grandchildren; Michael Snyder, Dorothy Snyder, Gwyn Lester, Stephen Ginn, Michael Ginn, Julia Ginn, and five great grand children; Levi Grantham, Wyatt Snyder, Kaela Lester, Seanna Hall, and Brayden Lester. She is also survived by her sister Peggy Posey of Madison, Alabama and numerous nieces and nephews. We will all miss her, and we rejoice that she is at home with her Lord. To God be the glory. Hallelujah! May you and Dad have a great 71st anniversary in heaven!

Anita Fay Ginn of Gulf Shores Alabama passed away at her home on January 02, 2022. Funeral services will be held on Sunday, January 09, 2022 at 12:00 PM at Radney's Funeral Home in Alexander City, Alabama, preceded by visitation at 11:00 AM.... View Obituary & Service Information

The family of Anita Fay Ginn created this Life Tributes page to make it easy to share your memories.

Anita Fay Ginn of Gulf Shores Alabama passed away at her home...

Send flowers to the Ginn family.